Loren Geller runs Playa Bike Repair (PBR), whose logo looks like a Pabst Blue Ribbon beer logo. He has been hosting a “Pop Up Liquidation Sale” at Valencia and 18th streets, selling a portion of his used hybrid bicycles for $175 each – and he will be there all weekend. 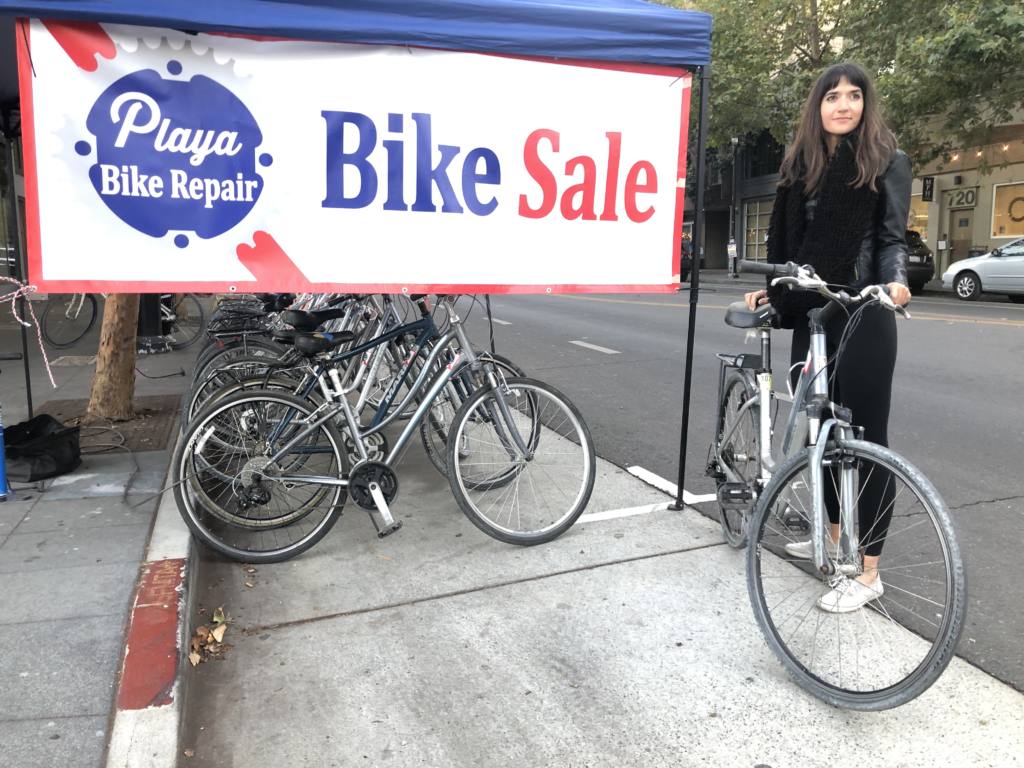 Photo courtesy of Loren Geller. One of his happy customers.

Geller works full-time and year-round, organizing Playa Bike Repair. He has lived in the Mission since the early ’90s, and has been renting and repairing bikes at Burning Man since 2011. The operation is complex and involves thousands of bikes, generators, solar trailers, mobile kitchens, semi-trailers and semi-trucks. “I grew up riding and fixing bikes as a kid, and I realized everyone at Burning Man has a bike and people needed a way to fix them, so I started renting bikes,” Geller explained to Mission Local.

At Burning Man, Geller fixes 4,000 bikes a week for free, and funds the repairs through his bike rentals. Burning Man is traditionally a place where one cannot sell things (except ice). When asked about this, Geller explained that there is a need for bike repair at Burning Man, and his rentals offer a sustainable way to prevent waste.

“Instead of people going out and buying a cheap bike at Walmart that they will leave as trash, they can rent a good quality bike from me.” He is in negotiation meetings with Burning Man to figure out how things will proceed in future years.

Geller has a degree in Conservation and Resource Studies from UC Berkeley, and thus he is fulfilling his goal of running sustainable businesses. Prior to managing Playa Bike Repair he worked as a festival organizer, in biotech, photography and in tech. Now, he focuses on his burning man bike repair and rental business.

Amidst a worldwide bicycle shortage resulting from China halting production for six months, Geller will be selling a portion of his more than 6,000 bikes to San Franciscans looking to travel by bicycle during the pandemic.

He will be at Valencia Street and 18th streets this Saturday, Sunday and Monday from 10 a.m. to 6 p.m.